Want to learn more about getting a Marriage Licence? Click here.

How do you get an Alberta marriage licence?

To apply for a Marriage Licence:

Both parties must apply together for their marriage licence. When both parties cannot appear at the same time, there are three options.

How long does it take to process a marriage licence?

The marriage licence is printed at Richmond Road Registry as soon as the affidavits are signed.

How do you get a marriage licence?

Please pay online, download and fill out the above form and bring it into Richmond Road Registry along with the proper documentation outlined above.

Your cart is empty.
This popup will close in:

GET YOUR new Alberta/Canadian Vaccination Card WITH QR CODE 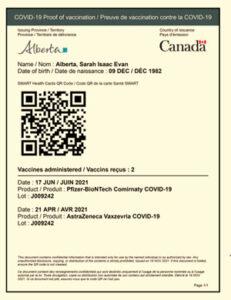 Claim it for you, your family, and your friends in person at our registry OR order online. Printing fee is $5.25 per card. Lamination fee is $3.00 per card. Extra copies are $1.00. Mailing costs to AB included.